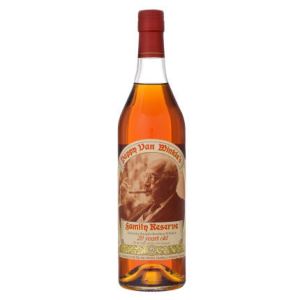 shelf in my office, tucked behind some books, sits a very lonely bottle.  It has been empty for quite some time, but I haven’t been able to convince myself to let it go as I know I’m not likely to come across another bottle anytime soon – at least not at a price I’m willing to pay.  The bottle (a gift from a particularly appreciative client) previously held Pappy Van Winkle Family Reserve 20.  It was excellent.

What made this particular hooch so good?  That’s hard to say.  Certainly the grain bill and the care taken in the distillation come into play. And after twenty years of aging, it was as smooth and mellow as any bourbon I’ve ever enjoyed.  But if I’m honest, the scarcity of the bottle probably also influenced my perception of that smoothness.

Aging your product for so long before you pull it out of the barrel that it is almost old enough to drink itself is a significant commitment.  And besides patience, that commitment requires quite a lot of capital.

But what if you could get a spirit that was effectively indistinguishable from Pappy Van Winkle 20 (or any other mature spirit) in just a week?  One company thinks you can.

Lost Spirits Distillery is seeking patent protection for a device that it claims can take spirits from the still to the equivalent of twenty years in the barrel, in six short days.  As you might expect, there are many within the industry that dispute this claim.  Many of those skeptics are undoubtedly motivated by concerns that product which may have been aging in rick houses for a decade or two might suddenly be rendered significantly less valuable as a result of this technology.  Others may be motivated more by a love of tradition.

But the few who’ve sampled their product suggest that the company’s claims may be correct.  And Lost Spirits has gas chromatography and mass spectrometry results which, they believe, provide empirical evidence to show that they can reproduce exactly (or very nearly so) the changes that take place in spirits as they age over twenty years.  If this is true, then maybe I’ll be able to get a bottle of “new” Pappy Van Winkle 20 soon and for a reasonable price.  I’d like that, but I still have a question.  What would this Pappy be called?

Under the rules of the TTB, certain types of spirits can only be called by certain names if they’re produced using certain methods.  Pappy – for example – can only be called “bourbon whisky” if it has been aged in charred new oak containers.  And Pappy Van Winkle 20 can’t be called “20 years old” unless it has actually been aged in those same charred oak barrels for at least 20 years.  This is a conundrum.

A particular ale drinker several hundred years ago wrote that a “rose by any other name would smell as sweet.”  Presumably that same bard would believe that a bourbon by any other name would taste as good.  But how would consumers feel if that rose or that bourbon couldn’t be labeled with its proper name?  And more to the point, what is to be done with regulatory requirements that fail to keep pace with technological change.  If Lost Spirits has indeed managed to crack the code and we can now age spirits 20 years in a matter of days, then consumers presumably stand to benefit from this development.  And, since the thrust of the TTB’s regulatory charge is essentially one of consumer protection, why should the TTB require adherence to traditional aging practices which have the effect of increasing consumer costs?

Going forward, if Lost Spirits (or any one of the several other companies trying to achieve the holy grail of rapid aging of spirits) succeeds in its quest, I believe the TTB will be required to take a fresh look at these regulations.  At that time, we should anticipate a lobbying battle pitting established market participants with many millions of dollars of product peacefully aging in barrels against market upstarts with shiny new gadgets that bombard the spirits with all manner of techno-wizardry to produce the same effect.  This is, of course, essentially a generational battle.  It promises to be exciting.

A business lawyer with an emphasis on assisting clients in consumer-facing industries, especially hospitality and retail. I have a keen appreciation for spirits, especially single-malt scotch whiskies (the peatier the better, please) and robust bourbons. I live on Bainbridge Island, Washington with my wife, three sons and an ever changing menagerie. My practice is based out of Seattle. View all posts by Brian B. DeFoe