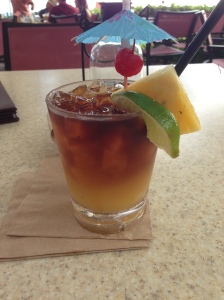 Once a month, my office hosts a social gathering for attorneys at our firm.  This gives us a chance to meet and mingle with people practicing law in other disciplines and occasionally even from other offices at the firm.  Which is a good thing, on the whole, because with roughly 200 lawyers in the shop it can be difficult to maintain relationships with far-flung colleagues.  Especially the tax lawyers – they’re a bit of an odd bunch.

So once a month, a few members of our firm’s social committee decide on a theme for the gathering – which theme dictates the food and drink that will be served.  Being a reasonably sociable misanthrope, I serve on the social committee.  And this month I was tagged (along with two junior associates and a partner who is relatively new to the firm and still getting his feet wet) with the responsibility of coming up with the theme.

That was probably a mistake.

So tonight, we’re having a tiki-themed social.  We will be serving food vaguely reminiscent of a luau.  We will be sipping from my particular riff on the flaming volcano cocktail.  And a few of us (well, one at least) will be wearing a grass skirt and coconut brassiere.

I mention all of this just for the opportunity to talk about rum.  The flaming volcano will require us to acquire some very high ABV rum (which I inexplicably didn’t already have in the office).  But what do we want?  Admiralty Strength?  Gunpowder Proof? Overproof?  What do all these terms mean?

There’s a fascinating story here – recounted well by Peter Holland over at Flaviar.  Put simply, these descriptors all derive from the fact that for the better part of three centuries the British Royal Navy issued a daily ration of rum to each of its sailors.  When this ration began, the King needed his Navy’s ships to tote around large quantities of gunpowder so that the cannons would work.  But the gunpowder wouldn’t ignite when damp with water.  And since there was a lot of rum on board being stored in potentially leaky casks very near to that gunpowder,  the rum needed to be of sufficient proof that it was itself pretty seriously flammable.  That way, if it soaked the gunpowder right before the Spanish Armada was seen on the horizon, those cannons could still be fired.

Today, we see a number of “overproof” rums on the market.  And while some use the nautical theme and heritage for marketing purposes, many simply reflect the desire for a high proof spirit (e.g., that can carry its weight in a fruity cocktail.  Or, for example, to serve as a flaming centerpiece in a punch bowl at an attorney social.