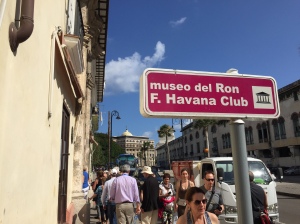 ne of this post, I described the lengthy litigation between the Cuban government (along with its joint venture partner, Pernod Ricard) and Bacardi regarding ownership of the trademark for Havana Club.

Yesterday, I returned home from a whirlwind trip to Havana, in which I had the chance to tour the Havana Club Museum of Rum.  On the basis of that visit, I can confirm that the good folks in Havana appear to have no plans to back down in this fight.  If and when the embargo is lifted, we should expect to see Havana Club on store shelves in the U.S. in its many different varieties, including not only the popular Añejo Siete Años, but also the Selección de Maestros (a bottle of which now has a prominent place in my office) and undoubtedly the Máximo Extra Añejo.

$1,700 per bottle at retail (and a production run limited to 1,000 bottles per year) the Máximo is not likely to be seen on too many shelves, however.  And despite my best efforts to persuade the good folks at the museum to crack open one of the hand-blown Murano glass bottles it comes in, I was unable to convince them that the Máximo needed an impromptu taste test.  So I am unable to assess whether it is decidedly different from its younger cousins – or from the excellent but far more reasonably priced Ron Santiago de Cuba Extra Añejo (20 years) that our group sampled (repeatedly and in significant quantities) back at our hotel.  I suppose I’ll have to wait to sample the Máximo.

What probably shouldn’t wait is a consideration of what opportunities may soon exist for U.S. entrepreneurs wanting to import spirits from Cuba.  To be clear, the trade embargo prevents such imports today.  But the likelihood of a lifting (or at least a relaxing) of the embargo is greater today than it has been at any time in the last half-century.

Even if the embargo were lifted tomorrow the substantial majority of business in Cuba – including the production of spirits – remains controlled by the government.  However, the entrepreneurial spirit is alive and well among the Cuban people, as evidenced by the ever-increasing number of paladares, home-based restaurants catering to tourists and locals alike, dotting the landscape.  Assuming the continuing loosening of Cuban restrictions on business, one can envision a day in which private distillation of rum once again returns to the island.    If and when we see a confluence of the two trends of thawing relations between the countries and continued growth of private enterprise in Cuba, entrepreneurs with contacts in burgeoning Cuban distillery operations, license to import spirits into the U.S. and the wherewithal to commit to that enterprise may find themselves with a product of such novelty that it essentially markets itself.