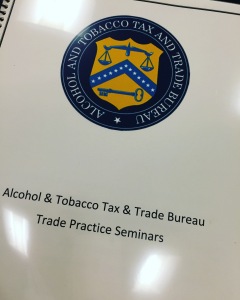 This week I had the pleasure to travel to one of my favorite cities in the U.S., eat some deep dish pizza and attend a baseball game.  But of course I didn’t go for the food or the ballpark (although both were excellent).  Rather, I went to attend a Trade Practice Seminar put on by our good friends at the TTB.

The seminar was filled with good reminders of ways to get yourself in trouble (commercial bribery, tied house, etc.).  The agency even offered a helpful binder with key points on these issues.

And then the pleasantness took a decidedly unpleasant turn.

The current director of the Trade Investigations Division, Robert Angelo, closed out the presentation with a discussion of enforcement.  He began his remarks by saying that this was the point of the presentation that others had described as “scary”.  It wasn’t the scariest thing that I’ve experienced in recent memory.  [Note: I am currently teaching my 15 year-old son how to drive, an exercise which has noticeably increased my tolerance for terror].  But it was nevertheless sobering for those of us in the audience.  Here are the highlights:

In addition to these items, Angelo shared a slide (not included in the handouts) showing the general trend in terms of the size of offers in compromise accepted by the agency over the past several years.  The slide included the the 2011 Bacardi OIC ($262,500), the 2011 Diageo OIC ($650,000), the 2016 Craft Beer Guild OIC ($750,000) and others.  His basic premise was that OIC settlement amounts were increasing quickly – and that if the allegations in the Diageo and Bacardi matters were brought forward today it is entirely possible that the TTB would refuse to accept a compromise in the first instance – or if an OIC was accepted it would be for a substantially larger penalty.

Of course, it is one thing for a regulator to talk tough and another thing entirely for a regulator to actually allocate the necessary resources to carry out increased threats.  Which brings me back to the $5 million in additional funding for the agency.  On one hand, $5 million is quite a bit of money.  But on the other hand, this really isn’t that much of an increase.  The agency’s budget for the fiscal year ended September 30, 2017 was $111.4 million.  So the $5 million in additional funding may move the needle but only slightly. Will it really be enough to allow the agency to fundamentally change the way that it has approached these matters for decades?

The only way to know for sure will be to watch the agency’s enforcement efforts in the next few months.  If we start to see accepted OIC amounts skyrocket, then we can take Angelo at his word.  But in the meantime, know that TTB is at least looking at this area with renewed focus – and stay clear of the traps.