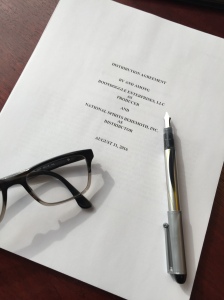 Recently, I conducted a (highly unscientific) twitter poll in which I asked a number of distilleries a very simple question.

Which is the bigger problem facing small DSPs today – lack of funding or insufficient distribution?

When launching the poll, I frankly expected lack of funding to walk away with a landslide victory.  But in fact the results were rather close – with 57% picking the lack of funding and 43% picking insufficient distribution.

Funding challenges exist continually and legal issues associated with those challenges have been the subject of some prior discussion on this site (and will, I’m sure, be the subject of future discussion as well).  The distribution relationship is so crucial to the success of many (most) spirits ventures that it is worthy of lengthy and regular study as well.  This post will not seek to examine each and every one of the potential provisions of a distribution agreement.  We can turn to those in due course in later discussions.  Rather, in this post I simply want to offer one guiding principle for producers looking to enter into distribution relationships.

The advice is borne of a few hard facts.  First of all, if you’re a small DSP (the kind that might respond to a twitter poll by a HoochLawyer), you’re already fighting an uphill battle on many fronts.  You’re stretched very thin with respect to capital and resources, and the volume at which you’re producing your product likely means that you’ve not yet achieved tremendous economies of scale – so your margins are pretty slim.  Maybe (probably?) you’re not even paying yourself a decent wage for your efforts – at least not yet.  But you hold out hope.

Now, you see the opportunity to put your product in front of thousands of potential new customers by signing on with a big distributor.  Great news, right?  Well – maybe.  If your product has (or at least has significant potential for) a cult-like following that will result in consumers calling up their local spirits retailers and demanding that they start stocking your bottles – then that big distributor may be a great choice.

Big distributors are just that.  They are big.  And you are not.  You are small.  This means that unless there’s a reason that the distributor really wants your account (e.g., the cult-like following mentioned above), you have very little bargaining power when you set to work negotiating the terms of your distribution agreement.  And with that kind of imbalance of power, we naturally expect to see the resulting distribution agreement strongly favor the distributor.  [Note: In fact, relevant state laws may favor the distributor as well, but there isn’t much you can do about that if you are wanting to distribute in that state and self-distribution isn’t an option.]

These situations can and do happen.  Recently, I had the chance to talk with a small distiller who was lamenting the five figure check he’d recently written to end a relationship with a non-performing distributor even though the original entry into the distribution agreement hadn’t resulted in any appreciable benefit to his brand (i.e., the distributor hadn’t managed to sell any of the distiller’s product).  If this feels patently unfair, that’s because in some circumstances it is.

This should not be taken as a blanket indictment of distributors.  They can and do serve a very valuable purpose.  But the distribution relationship should not be entered into quickly or without care.  Before signing on, the prudent producer will do some due diligence on the distributor and how they actually perform after the ink is on the contract.  While counter-intuitive, for smaller DSPs it is often more beneficial to have many relationships with small distributors than a few relationships with larger distributors.  Even though the smaller distributors may individually have fewer sales accounts, you will represent a larger piece of their business and they’ll be more interested in keeping you happy and pushing your brand.