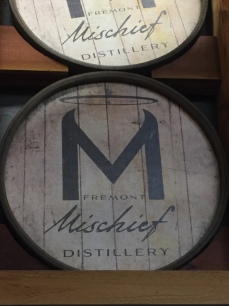 This past week I had the good fortune to attend the kick-off event for the marketing of Proof – the annual event held by the Washington Distillers Guild as a showcase of distilleries in the Pacific Northwest.  Proof is a great evening, and if you expect to be in Seattle the evening of July 8, you might want to check it out.  But be warned, Proof typically sells out so you’ll want to get your tickets early.

The kick-off was hosted by the Fremont Mischief distillery – headquartered (appropriately enough) in Seattle’s Fremont neighborhood.  Fremont is a bit of a mishmash of Berkeley, California (think – naked people riding bicycles during celebration of the summer solstice and a large soviet-era statue of Lenin that people periodically decorate) and a Norwegian fishing port.  The Norway connection is particularly strong in light of Fremont’s neighbor to the northwest – the Ballard neighborhood.  Ballard is home to many things (including a very good aquavit) – the largest movable items among which are probably the myriad fishing boats that alternate between Seattle and the fishing and crabbing grounds of the Bering Sea.  You know many of these boats from the always popular Discovery Channel program Deadliest Catch (affectionately known in the HoochLaw household as “Crab’s Too Cheap”).

Fremont is banking on your familiarity with Deadliest Catch, or at least your familiarity with the show’s celebrity captains.  Their Storm Tossed Rye Whiskey is aged in barrels stored on some of these boats as they prowl occasionally frozen but always frigid waters looking for crustaceans. And for the truly committed seafood fan, they offer the chance to buy some of their white rye whiskey and contribute it to the barrels to be stored aboard one of a few captains’ vessels.  By doing this, you raise funds for the captain’s charity of choice (the distillery keeps track of how many bottle-equivalents have been bought for each captain’s barrels), and get the right to buy a bottle or two of the next batch of Storm Tossed Rye Whiskey (after it has been aged at sea aboard one of these vessels) at a slight discount.  Sweet deal, right?

At its base this is an example of co-branding.   When co-branding situations go well, everyone benefits.  So, in Fremont’s case for example, the captain gets bragging rights (and possibly a licensing fee or something similar), the captain’s designated charity gets donations, Fremont sells a few bottles and Fremont’s customers feel increased ties to the brand. That is a great result.

But any co-branding endeavor also comes with some risk.  First, the parties need to remember that when you hitch your wagon to somebody else’s horse, your wagon may end up getting covered in manure.  [Note: This isn’t to say that your horse might not just as easily cover your wagon with manure.  But for some reason, manure seems to smell sweeter (or at least not so foul) when it comes from your own livestock.]  In other words, with reward comes risk.  In this case, we’re talking about reputational risk.

Fremont has chosen to co-brand with a few fishing boat captains.  Those captains, not surprisingly, curse like sailors and are apt to get into trouble when they hit land.  One of them, for example, recently made headlines here in Seattle for some reasonably antisocial behavior involving an Uber driver.   For an outfit called Fremont Mischief Distillery – that kind of behavior may not generate meaningful reputational risk.  But it might generate significant reputational risk for a distillery that positioned itself as a kind of Mom & Apple Pie outfit.

What’s more, there is a real potential for reputational risk if the missions or brand images of the two parties are (or at least seem to be) at odds.  A great case study for this is found in the now-abandoned relationship between Shell and Lego.  The relationship was fruitful for both companies for many years – but then Greenpeace stepped in, and a few viral videos and pictures of polar bears floating precariously on ice made from lego bricks later….  You get the picture.

As spirits brands continue to pursue new and novel ways to market their products, co-branding opportunities can make a lot of sense.  But with this exercise – just as with any other commercial relationship – do your diligence and make sure you know what you’re getting into.  What’s more, make sure that your contractual arrangements allow you to pull the plug on the deal if your partner does something that makes the deal unworkable or your brand begins to suffer because of association with your partner.  By thinking through some of those issues up front, you may save yourself a lot of heartache later.