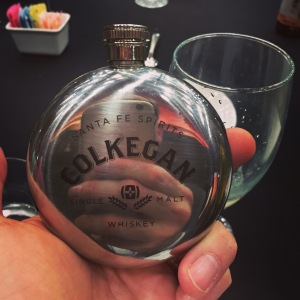 Over the past several days, I attended the American Distilling Institute annual convention – held this year in Baltimore.  As expected, it was an active several days – filled with opportunities to meet and chat with spirits companies from around the U.S. (and beyond); talk with vendors about the latest and greatest in distillation technology, barreling and packaging; and participate in educational sessions.  Overall, it was a productive event.

But one portion aspect of the event stood out to me as being less than productive: a workshop on the future of direct-to-consumer sales.

Don’t get me wrong, being able to ship directly to consumers – especially to those consumers outside of a distiller’s home state – would be delightful.  In my backyard of Seattle, for example, it would allow a large number of destination distilleries that receive meaningful tourist business in the summer to be able to easily sell to those out-of-town visitors after Seattle returns to its rainy season (basically September through July) and the tourists go home.  And – from a purely selfish perspective – it would make it easier for me to obtain bottles of the extraordinary stuff I have the chance to sample at events like the ADI convention.  [Note: if you find yourself in New Mexico – go to Santa Fe Spirits and try the Colkegan – amazing stuff and a new personal favorite in the [not yet an official] category of American Single Malt Whiskey.  I’d like to order it, but they can’t ship into Washington.]

But here’s what direct shipping to out-of-state consumers won’t do.  It won’t actually do much to help build your spirits brand.

Regardless of whether you can ship your products to out-of-state consumers, you need to give them a reason to buy.  In a thoughtful (and very entertaining) presentation at ADI entitled “No One Wants to Taste Your Sh*t”, Jack Summers and Robin Robinson put forward their view – simplified for the purpose of this post – that brands succeed or fail not simply on the basis of the quality of the product but rather on the basis of the relationship that the brand has with the consumer.  I wholeheartedly agree.  The beverage world is filled with products of questionable quality that are extraordinarily successful on the basis of brand positioning and marketing – leading to relationships with consumers.

As a case in point, consider Corona.  Does anyone actually think it is any good?  The brand’s own advertisements don’t even mention quality – focusing instead on lifestyle and the chance to “find your own beach.”  I’m not suggesting that spirits producers should eschew quality in favor of flashy marketing.  But I am suggesting that if you don’t intelligently market your product and seek to develop relationships with consumers and brand champions (what Summers and Robinson referred to as “evangelists” for your brand), you’re unlikely to reach the promised land of having consumer demand outside your backyard.

And this is where we get back to the idea of direct-to-consumer shipping – and where the ADI presentation on that topic seemed to come off the rails.  The presenters (who I will not here name) used their time to stump for donations to an Indiegogo campaign to fund a lawsuit to extend the Granholm v. Heald ruling to cover spirits.  As you may recall, in Granholm, the U.S. Supreme Court issued a fairly narrow ruling – which can be summarized to say that if a state is going to permit direct-to-consumer shipments to its residents by its in-state wineries, it must also allow out-of-state wineries to ship to its residents.  Extending Granholm to spirits would – in the views of the presenters – be a panacea for spirits producers.  [Note: One of the presenters also suggested that just as he remembered where he was on the day that Martin Luther King, Jr. was assassinated (the presentation was on the anniversary of that tragedy) those in the room would remember where they were on the day they learned about this push to extend Granholm; it is unclear whether this fellow was attempting to be humorous or simply tone-deaf to the suggestion that those two events were or would be in any way of similar historical significance.]

But setting aside the question of whether the time was well spent (it wasn’t), whether the presenter’s comments were in good taste (they weren’t) or whether those who heard this pitch came away with anything of value from the discussion (they didn’t) – is contributing to such a campaign actually a good idea?  Would extending Granholm actually be a panacea for small spirits producers – and if so, is it worth funding the effort?

For several reasons, I think the answer is “no” to both of those questions.  First, the presenters’ suggestion that they needed to raise a relatively modest sum of money ($10,000) to fund the lawsuit is laughable.  Litigation is very expensive – and to extend the Granholm ruling to cover spirits would likely require litigation at the U.S. District Court, Court of Appeals and Supreme Court.  The sums solicited in the campaign would be insufficient to fund even the first of those efforts.

Second, there is no assurance that the Supreme Court would take the case.  To have a case heard by the Supreme Court is quite rare; the Court actually only hears about 1% of the cases that litigants seek to bring before it.  It is certainly possible that the Court would agree to hear this case – it did after all agree to hear Granholm – but it is by no means certain.  And assuming that the Court refused to hear the case – those who fund the litigation will have wasted their contribution.

Third, remember that Granholm did not say that a state was required to permit direct-to-consumer sales.  Rather, it simply said that if a state is going to permit those sales by wineries within its borders, it must also allow them by wineries outside of its borders.  A state – faced with the extension of Granholm to cover spirits – could conclude that it is inappropriate to allow direct-to-consumer sales of spirits to its residents by any party.  In other words, if you’re currently operating in a state that allows you to ship direct to consumers in your home state and Granholm were to be extended, your state legislature could conclude that all direct-to-consumer sales should be halted rather than allowing shipments to come from other states.

Last, consider again the fact – eloquently stated by Summers and Robinson – that no one wants to taste your sh*t.  Changing the laws to allow you to more easily sell to out-of-state customers isn’t going to change that.  Put another way, extending Granholm isn’t actually going to create a market for your brand in any location.

So at the risk of angering others in my profession – let me suggest that if you’re a craft distillery that has a few extra dollars fattening your wallet and you’d like to spend them to improve your lot in life, you can make better use of those funds than by putting them in a lawyer’s war chest.  If you really can’t help yourself and desperately want to provide those funds to a law firm (and bless you for that – it is after all how I feed my continually hungry children), use them instead to have your lawyer look over the next distribution agreement you want to sign (before you sign it).  But better yet, spend those funds by visiting one of your distributors and riding along on a visit to a few good customer accounts – generating goodwill with the customer and improving the customer’s relationship with your brand.  Using the cash to increase the demand for your products is a better bet than using it to build a litigator’s resume.